Writing Reiki isn’t as straightforward as is commonly assumed. I long wanted to help people go into more depth, but it took a while to find the right person to do it.

It was the title of guestblogger Colin Powell’s Reiki facebook page that first caught my eye — Reiki Pure and Simple — as I had originally chosen a similar title for my book (changed by the publisher to REIKI: A Comprehensive Guide). We connected online and in webinars, and met for dinner when I taught the Reiki and Medicine seminar in London. Colin has been researching the Japanese origins of our practice, and I invited him to share his perspective with us. —

EVOLUTION of the TERM REIKI in JAPANESE 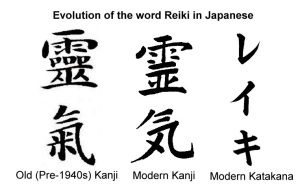 Each of the above images can be read as the term Reiki by most Japanese people. The image most Reiki practitioners in the West are familiar with is the middle one, which is used on many book covers, websites, publicity material, and even the logos of many of the largest Reiki Professional Organizations, including the Reiki Association and UK Reiki Federation here in the UK, where I live.

Which image do you think would be the one most familiar to the general public in Japan?

Interestingly, it would be the one on the right, the modern Katakana way of writing the term Reiki. Before I explain why that is, let’s look at how the Japanese language is written.

There are three main alphabets — or more correctly, syllabaries, or character sets — used in the Japanese language,1 as follows:

Kanji is the oldest character set. Kanji actually consists of Chinese characters (hanzi) that were imported into Japan, where they became known as kanji, around the 5th century CE. Today only around 2,000 of the 5,000 to 10,000 original kanji are in regular use, as the result of revisions of the Japanese language in 1946 and 2010. Many kanji are based on stylized pictograms, and their component parts (or radicals) can have their own meaning. Many kanji can be read with both a Japanese pronunciation (kun yomi) and a Chinese pronunciation (on yomi), depending upon the context.

Hiragana is a syllabic script in which each character represents the sound of a syllable. This was not always the case. Hiragana was once a script used only by women, derived from the kanji, and having several different characters representing a single syllable. The simplified one-to-one syllable correspondence was finalized as late as 1946.

Katakana is also a syllabic script, originally considered “men’s writing.” It is based on characters that were used by Buddhist monks as an aid to correct pronunciation of Chinese texts.

Today katakana is used mainly to write non-Chinese loan words, onomatopoeic words, foreign names, telegrams and for emphasis (the equivalent of bold, italic or upper case text in English). Prior to the 20th century many foreign words (especially Portuguese) were actually written in kanji.2

Why would most modern Japanese people be more familiar with the katakana way of writing Reiki? The answer is that, although the practice of Usui Reiki Ryoho became quite popular in parts of Japan before World War 2, such practices declined after the war, only surviving in isolated locations, and the term Reiki slipped out of use.

In the 1980s, when people such as Mieko Mitsui, a student of one of Hawayo Takata’s Master students, Barbara Ray, traveled to Japan to research the roots of Reiki practice, they found few people who had even heard of Reiki healing.3

As people from the West began to teach Reiki practice in Japan, some students did not even recognise the term Reiki as being Japanese, so it became written as an imported term, using the phonetic characters re, i, and ki in katakana. An article about Reiki practice in a Japanese magazine from 1986 has an ad for Barbara Ray’s book, with Reiki written in large katakana and romaji (Western letters) rather than kanji (below left).

Meanwhile, even some Japanese Reiki practitioners in that bastion of Usui Reiki Ryoho, the Gakkai,* were now using modern kanji to write the term Reiki, as can be seen in Japanese copies of their handbook, which was published in the mid-1970s (below right). 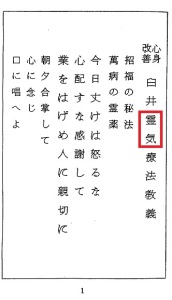 PART TWO of Colin’s article discusses how the term Reiki was written in the time of Mikao Usui, and specific points about the meaning of the kanji. There you will also find a pdf version you can print out and use for yourself and your students.

*The Usui Reiki Ryoho Gakkai (Usui Reiki Healing Method Society) was originally set up by some of Usui’s students shortly after his death in 1926 (some sources say that it was set up by Mikao Usui himself in 1922), with the aim of preserving the practice Usui Reiki Ryoho. The first few Chairpersons of this society were naval officers. The Gakkai went underground during the post World War 2 clamp down on traditional oriental healing methods and militaristic/nationalistic organisations. The Gakkai has remained hidden and, although there are still some branches in existence, it is not known exactly how many members there are. It functions as a closed society, only accepting family members. Other Japanese Reiki practitioners are no longer allowed to join. Most members are very old, and unless younger practitioners join, the Gakkai could die out in the not too distant future.

3. https://www.aetw.org/reiki_1986_article.htm Translation of the 1986 Japanese Twilight Magazine Reiki article, a page from which is shown above.

Thank you to Paul Selk for his fact-checking assistance.

RELATED READING:
Reiki Is Not a Word
What Does the Reiki Kanji Really Mean?

Escrever Reiki a Evolução da Palavra Reiki no Língua Japonesa is a Portuguese translation of this article, Writing Reiki, and What Does the Reiki Kanji Really Mean? that you can print and share as is, without copying or changing the content or presentation in any way. Please do not email or post it on your website, but you are welcome to post a link to the article here. Thank you for your support.