Maud Maynard is a Reiki  Master in Greenwich, NY and a Board Member of The Vermont Reiki Association. Maud was in the first WRITE REIKI series. 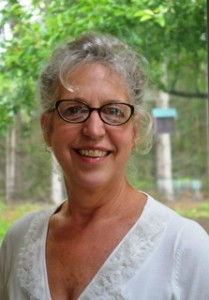 Starting Over: A Midlife Change of Perspective
by Maud Maynard

I felt empty, without direction. Post divorce, empty nest, knowing I had to make changes, knowing I had to leave my house in the woods, my haven. I couldn’t imagine a life that didn’t include the sanctuary of these woods or the comfort of this home.

I had managed to distract myself with work and by focusing on getting the kids off and chasing their dreams. In addition to my position at a local art gallery, I worked for a catering company and also took on pet sitting jobs.

In spite of the extra work, with the three kids away, my life, like my house, was quiet. My bravado was crumbling and there was nowhere to hide. My goal of staying in the house until my youngest daughter entered college had been realized and now it was time for Plan B.

I had no clear idea of just what that might be, but I knew it meant leaving this place, and I wasn’t ready to say good bye.

I had been practicing Reiki for five years but abandoned self treatment after the first three years. The divorce just wore me down. I didn’t feel anything when practicing self Reiki, so self treatment seemed pointless. I enjoyed practicing on others, but convinced myself I was too damaged to help myself. My logic was flawed, to say the least.

But now I knew I needed Reiki treatment and that’s when I found Margaret. My anxiety lessened as soon as we made arrangements to meet.

Before getting on the table, I told Margaret I was a Reiki practitioner who hadn’t had a treatment in a long time. I was in for a tune-up. I didn’t disclose my divorce or the challenges I was negotiating.

Margaret was open and unassuming, her presence calming. Responding to the treatment immediately, I found myself quietly drifting, aware of being supported by the table, able to soften physically, mentally and emotionally. The knots I had tied myself in began to loosen.

For the first time in four years I was simply in the moment, feeling cared for, not thinking about my next move. I felt light and deeply nourished.

I had forgotten the power of receiving a Reiki treatment. Something shifted in my thinking, and in my feeling. No drama, no heroics, simply a knowing that I was all right, and would see my way through whatever lay ahead.

I resumed self practice. And that, as they say, has made all the difference. Frequent self treatment eventually became daily self practice, which continues to bring me peace and stability.