The first gorgeous spring morning of the year reminded me of a poem by E. E. Cummings, [in Just-]. It begins:

When it came to capitalization and punctuation, Cummings did his own thing. Coming across his poetry as a kid, that was a revelation. He broke free of the rules and celebrated life his own creative way! YAY!

Cummings’s poetry opened a vista of possibility and freedom, of not obeying rules needlessly, and of course, my poetry immediately reflected my new understanding that punctuation and capitalization were optional.

Do you remember when you first experienced Reiki practice? Did this exquisite practice open a sense of freedom for you, the possibility to be happy and healthy, free to be yourself, feel supported, and recover from life’s little and not-so-little traumas?

Likely you’d never before experienced anything like it. Maybe you didn’t know this level of well-being was possible.

Many people express a similar sense of freedom and opening to life’s possibilities when they first came upon Reiki practice.

And perhaps out of enthusiasm, many took license with Reiki practice. Without taking the time to practice, they rushed in their excitement to share what they discovered. And often imagined they could improve upon it, make it more interesting, or more effective.

But a spiritual practice isn’t a poem. There are things we can take license with, be creative with and alter randomly, without losing anything. And there are other things that, if we take license, there will be repercussions. Unforeseen repercussions, and loss.

Why do I bring this up? Because taking license with Reiki practice has led to dismissive TV Reiki. It doesn’t matter that it was done with the best of intentions. And now we’re seeing the repercussions. 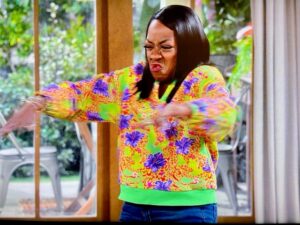 I’m not a big TV fan. We didn’t even have a television when my kids were young.

But last week was really, really busy. Twice I collapsed on the sofa at end of day to veg on a little TV. Two shows I watched mentioned Reiki.

Not in a respectful way.

I’ve certainly seen worse. Some media portrayals of Reiki practice have been truly unfortunate and derisive.

One of the shows I streamed last week was The Neighborhood. Have you seen it? It’s very funny, very current, with an engaging comedic cast. The sitcom addresses important topics, especially diversity, with skill and often LOL humor. A laughing audience is more likely to digest the sometimes hard looks the show so deftly delivers.

Reiki in The Neighborhood

In one of this season’s episodes, Tina makes fun of Gemma’s interest in holistic healing, singling out Reiki practice for ridicule.

After commenting on singing bowls and crystal rubs, Tina says, “But that Reiki massage! I mean, thank God I didn’t pay for it. You know she never laid a hand on me!”

To which Gemma replies, “Tina, this isn’t a joke to me.”

Tina: Oh come on, Gemma, you didn’t think that was weird?

Gemma: I believe in energy healing.

Tina: Ha! Since when? We used to make fun of the hippie dippy Cali girls flirting with trees and howling at the moon.

Gemma: It’s more than that. It’s about tapping into the feminine collective and healing.

Tina: Are you sure this is sage you’re burning?

Then the conversation takes a nice turn, with Gemma sharing how her foray into mysticism helped her heal after a miscarriage, when nothing else was helping.

That’s a familiar plot twist, and maybe you’ve lived that story line yourself or with clients, with Reiki practice helping when nothing else does (it’s all about restoring balance). 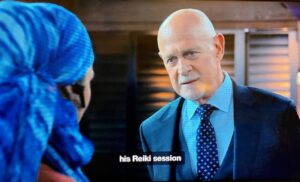 The other TV Reiki mention I saw recently was on a very different show, and not one I often watch, so it was intriguing I caught them both in the same week.

In an episode from this season, NCIS LA mentioned Reiki practice with a shmear of scorn. Hollis Kilbride, the administrative head, was reluctant to call one of the team members, an investigator generally depicted as rather loosey-goosey, lest he disrupt “his Reiki session.”

Is goofy TV Reiki better than no TV Reiki?

The good news is that any TV Reiki means the term Reiki is entering the mainstream. Pause for celebration.

Yet every time I’ve seen Reiki mentioned on television, it’s been in a mocking or at best dismissive way. So yes, more people have now heard of Reiki, but is TV Reiki the Reiki practice you know and value? Does it matter?

Television is the most powerful mainstream media, at the pinnacle of the media pyramid. The fact that every time Reiki practice is mentioned on television, it’s a putdown, doesn’t seem like such good news.

None of the TV Reiki showed any awareness that patients suffering from cancer in hospitals are receiving Reiki sessions and it’s helping them feel better. It’s restoring their sense of themselves.

I wonder how it feels to be someone whose deep suffering was relieved by Reiki practice, who then sees TV Reiki delivered as a punchline.

Where did dismissive TV Reiki come from?

Surprise! TV Reiki mockery can be traced directly to us, the Reiki community-at-large. We did it.

If you doubt that, just look at how Reiki practice is typically represented, what Reiki professionals put on their websites and ads, how Reiki practitioners discuss what they do, the magical images and language that’s used, and you’ll see where dismissive TV Reiki came from.

That trend will continue, and will damage the future of our practice, unless more of us make an effort to improve Reiki messaging on the internet and in all media, including TV Reiki.

When Reiki practitioners look, shall we say, unbalanced, and we work with people who are in need and vulnerable…that combination invites state regulation of Reiki practice as a way of protecting the public.

Improving how Reiki practitioners represent our practice has been one of my most treasured goals for decades, and I offer many resources for those who want help. Look at the Communicating Reiki articles on this blog, the free Helping More People tips, and the 4 Step Balance System for Communicating Reiki to Anyone and Everyone.

Whenever approached by the media. I respond quickly, positively, and mindfully. That’s led to credible Reiki mentions in The Atlantic, US News and World Report, Allure, The Daily Beast, the list goes on. And TV Reiki includes my appearance on The Dr. Oz Show (I collaborated with him on the care of his patients, including in the OR for open heart surgeries).

Recently, I started working with publicity coach Selena Soo to land impactful Reiki media placements. No TV Reiki yet, but my articles have been published in mindbodygreen, Forbes, and Authority Magazine. (In the Forbes article, I discuss steps to take when there’s a negative public image of your industry.)

Are you ready for Reiki media attention?

Selena Soo is an experienced publicity coach who helps people like us — professionals who help people. She helps us be seen by a wider audience through targeted media placements (BTW media, unlike advertising, is free).

After being helped by holistic professionals to heal from a debilitating quarter-life crisis, Selena realized most people don’t even know the kind of support we offer exists. She refers to us as “hidden gems” and “best kept secrets,” and she’s literally made it her business to change that.

I understand the idea of reaching out to the media and being featured might seem daunting. Most helpers shun the spotlight, preferring to support from behind the scenes. There’s much to be said for humility, but is it only humility, or is there fear involved? When you stay behind the curtain, you have no impact on how your work is represented, and you can be sure it will be at least a tad misunderstood.

While it might seem like a magical mystery road to get media access, it’s actually not so hard, when you have good teachers. Selena and her team are experienced, savvy, and — so important to me — heart-centered.

People in the media are always looking for content that interests their readers/viewers/listeners, and they’re always on deadlines. There are so many things you can do wrong when reaching out to the media, ways you can inadvertently signal that you can’t deliver what they need. Selena’s top media expert, Lynya Floyd, is a working, accomplished health journalist. Lynya shares not only the how-to, but also the do-nots, so you don’t have to learn them the hard way. Working with experts costs money, yes, and it saves you time and money.

Too many Reiki professionals have an outdated, magical “build it and they will come” approach to their work. People today have too much information coming at them for that to happen. You need to have a clear message and get it in front of people in ways that build your credibility (especially for Reiki practice). Without a clear message, you really don’t want to go viral lest you become fodder for the ridicule mill.

Selena’s yearlong Impacting Millions program is about to start, and it’s an opportunity I encourage Reiki professionals to consider. Not only will you learn from Selena and her team, I’ll also work with you on your Reiki communication throughout the program. Here are the bonuses I’ve added for those who enroll through my page, bonuses which include lifetime access to all 9 Reiki Professional Academy recorded trainings.

Have questions? Please leave them below in a comment, read the FAQs, or contact Selena’s team directly.

If this seems timely for you, act now. Enrollment ends Friday, March 25.