Reiki master Dona Duke supervises a Reiki program in an animal rescue shelter that has 800 volunteers and serves 10,000 animals annually. Each animal Reiki practitioner needs to be carefully vetted. I asked Dona to share her experience. 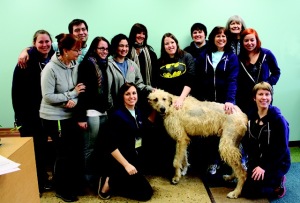 Usually I am inspired by the practitioners who come through our doors wishing to share Reiki with the animals.

And other times, not so much.

A woman who recently moved to our area from the West Coast arrived with a handful of certificates and regaled the staff with her expertise as a Reiki master. I met her for conversation and a tour of the facility. She commented on the animals as we passed their kennels, saying:

“That dog is toxic and needs his negative energy cleared.”
“This one needs a psychic surgery treatment to clear her field.”
“This animal will not be good with children or men.”

It was as if every dog she saw were broken and in need of her special brand of fixing.

I referred her to our dog walking volunteer program and to a local, reputable monthly Reiki share. My hope was that practicing with others would help her understand healing from a Reiki practice perspective rather than a correcting/intervention approach.

I knew I couldn’t trust her to be with the animals on her own until she understood the role of a Reiki practitioner is not to be the Corrector-in-Chief, but to gently facilitate the animal or (person’s) own self-healing.

Another applicant was in school to become an animal behavioral professional, and had recently completed First degree Reiki training. Her goal was to use her combined skills to change behavior, and she wanted more experience practicing Reiki with dogs, which seemed like a good plan.

But as I listened, it became apparent she had a very structured ideology regarding her techniques. I wondered if she would be able to adapt to the needs of a rescue shelter environment.

We entered the holding area where animals go after intake, before they are placed for adoption. This is where they begin to feel safe in new surroundings, and receive pre-medical assessments and behavior observations.

The woman walked up to a very large Doberman, braced herself in a dominant physical stance, looked at the dog and said, “I know what you need. You need to learn to respect authority and you need disciplined handling!”

The Doberman responded to her aggressive intrusion by lunging at the gate that separated them, teeth bared. He continued barking and snarling even as she jumped back. It was not a pretty picture.

I asked her to step away, and waited a couple of minutes for the scene to cool down. I had visited this particular dog two days earlier, and he had been receptive and calm as I offered him a Reiki treatment.

I walked to him, squatted low in front of his kennel, and asked if he would like Reiki treatment. He curled up on his blanket in front of me with his head near my hands. I stayed until his breathing became normal and he looked relaxed.

The Doberman situation illustrates the damage a Reiki practitioner can do. The applicant’s actions could have cost the dog his life. Any animal that bites or injures a person is placed in quarantine, re-evaluated, and put down if deemed necessary.

If I accept a Reiki volunteer who is likely to say or do things that could offend or confuse the animals, I’m not only endangering them, I’m endangering the public’s acceptance of Reiki practice.

Had either of the practitioners above come to our shelter before I did, we probably wouldn’t have a Reiki program today.

Are you a Reiki professional? It’s important that you communicate Reiki practice clearly. The Mainstreaming Reiki recordings help you develop clarity and improve your skills.