I was moved by Ruth Goode’s experience practicing Reiki on a severely disabled teenager, and asked her permission to share her email with you. 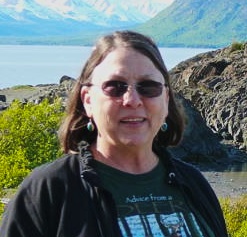 I practiced Reiki on my cousin’s grandson recently. He’s 15 and severely handicapped.

He doesn’t communicate except with noises. Although he can hear and has some sight, his eyes can’t really focus that well. He suffers involuntary movement of his limbs.

Two years ago, he fell out of his wheelchair and got a lump on the side of his knee. That was the first time I practiced Reiki on him. He was in bed, and while my hands were on his injury, he slowly turned his head — a big feat for him — and looked me right in the eye. It was a powerful moment for me.

Recently when I visited, he was in the hospital with a very bad cold.

Before I placed my hands, I asked him if it was okay and then told him what I’d be doing.

Soon as I placed my hands on him, he tried to lift his head, got a great big smile on his face and attempted to hold my arm settling, though, on resting his hand on my thigh.

While my hands were on him, I wasn’t talking except for a few words. I’d say, “Does this feel good?” knowing he couldn’t answer. I just felt I should say something.

Usually when I practice on someone, we are talking a bit about what Reiki practice is, how that person is feeling, things like that.

But this time, that wasn’t possible because he doesn’t talk.

This was the first time I didn’t really chat with the person I was practicing Reiki on.

Without talking, I was able to be fully present with my practice and with him, and noticed more than I have in the past. I could feel a more intense feeling, as if I could feel the congestion in his chest subsiding, and he got more relaxed.

The I practiced Reiki again on him later that day. He was in the bed and fell asleep within about 15 minutes.

It was a new experience for me to practice Reiki on a non-verbal person.

While I was practicing Reiki in the hospital, the floor doctor came in with a resident and I briefly told him what I was doing. He did a little exam and said his lungs and throat congestion seemed to be lessened. The doctor also said he’s up for anything that works for people and put his stamp of approval on my actions.

His mother was there (I wanted to make sure she’d be in the room) and she did say he was enjoying it as she can tell his moods and movements. I practiced Reiki on her back, too! I encouraged her to learn to practice and got a good recommendation for a teacher near them, but it’s hard for her to find a few days to devote to the training.

I was grateful I could help a bit, and I learned so much from the experience.

1 thought on “Practicing Reiki on a Teen with Disabilities”