Guest blogger San Antonio Reiki master Carolyn Maloney has worked hard to save Reiki healing in Texas. Here she shares how Texas Reiki practitioners foiled two attempts to license Reiki practice. The Associated Bodywork and Massage Professionals map tells you where you can ascertain if Reiki practice is regulated in your state. 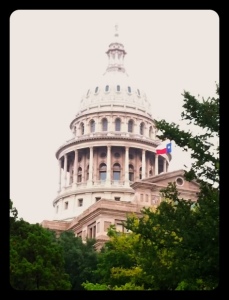 When I heard in 2007 that there was another bill before the Texas state legislature to regulate Reiki healing, I thought, “Not again!”

The first attempt to require Reiki practitioners to be licensed came before the Texas House of Representatives in 1998. The Reiki community was stunned to learn the move to regulate Reiki practice in Texas was led by one of our own.

A Reiki master with a connection in state government maneuvered a bill to the House of Representatives which if passed, would name her as the only recognized Reiki master in the state of Texas, and only her students would be legal to practice or teach in Texas.

In 1998, once we got past the initial shock, we quickly formed a group, the Texas Independent Reiki Practitioners Association (TIRPA), and mobilized.

TIRPA went to the state capitol in Austin. We spoke to any senators and representatives we could reach, and mostly to their staff, explaining that Reiki practice is neither massage nor a medical intervention. We set up tables in the capitol rotunda and practiced Reiki healing on everyone who was willing.

Our efforts were effective in helping people in the capitol realize they did not have to remove their clothes and that we didn’t even have to touch them. A few days later one of our senators called and said the bill had fallen off the table.

Our group was happy and we hoped it was all over.

The threat of licensing in 2007 came after a spa that had advertised “energy work” was busted for prostitution. At the same time, there was talk from other quarters that Reiki practice is a cult or somehow inherently evil.

TIRPA had long since disbanded, but Peter McCarthy, chair of the Texas Health Freedom Coalition, helped us figure out what to do this time. Peter’s wife is a Reiki practitioner and he encouraged us to call the representatives and senators to remind them Reiki is not massage.

We gathered Reiki practitioners from all over Texas, regardless their practice style, and crafted a letter to the legislators, with a statement explaining that Reiki practice is not a religion or a cult, but a balancing practice somewhat similar to a practiced used by many nurses, called Therapeutic Touch.

The letter made the following points:

We associated Reiki practice with the popular family movie, Karate Kid. There is a scene in which the little boy is hurt in sparring, and Mr. Miyage places hands on the little boy and heals him. The letter also specified that Reiki practitioners do not tell people to stop taking medication and would refer clients to a doctor if a situation required professional assessment.

We asked each Reiki person to copy the letter and mail it as a signed statement to their individual state senator and representative, whom they could find listed on the state website.

The approach of education resolved the controversy and stopped the discussion of licensing. At least for now.

MAINSTREAMING REIKI: Is Reiki Safe? webinar recordings are now available! As local regulators become more aware of Reiki practice, it becomes even more critical for Reiki practitioners to discuss safety credibly, without resorting to beliefs. Part 1 will help you do that, and Part 2 addresses practitioner safety.
Part 1: Is the Client Safe?
Part 2: Is the Practitioner Safe?