Trish Guglielmo was in my First degree Reiki class in November 2010. I was impressed by her enthusiasm and drive — literally, she drove 90 minutes each way, three nights in a row — and I’ve enjoyed her Reiki practice stories. 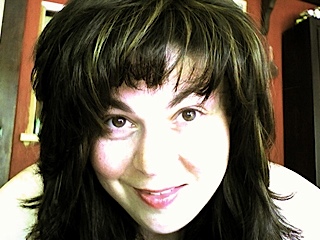 Reiki Healing and Back Surgery
by Trish Guglielmo

My brother recently had spinal surgery. Two discs were replaced. He opted for surgery because he’d been in debilitating, unrelenting pain for a year. He feared he would lose his leg strength and never be out of pain. The pain traced back to injuries caused when he was thrown by an electrical fence that hadn’t been turned off during business hours.

A few days before his surgery, I gave him a Reiki treatment. My brother usually isn’t interested in anything other than conventional medicine, but at this point he was open to anything that might provide some relief. His willingness to jump on the table was honestly a bit shocking to me, and I was glad he was open-minded.

He was snoring by the third placement of my hands, and I had to gently rouse him to turn over so I could place hands on his back. He was sore afterwards, expected because it is so uncomfortable for someone with back issues to lie flat for an hour. A few days later, he went to Maimonides Hospital for his surgery.

This was a serious surgery, so I planned to spend the day with him. An emergency operation delayed his surgery until the afternoon. I stayed with my brother until they wheeled him into the operating room, laying my hands on him whenever possible. When he napped, I placed my hands on his head and heart.

He was confident his surgery would be successful, and had no visible anxiety. He was calm and optimistic, and looked forward to being out of pain.

It was a long procedure and we waited patiently for hours. Finally, the surgeon appeared with the wonderful news that the surgery was a success and my brother had done very well. I saw him soon afterward in the recovery room.

Reiki healing in the recovery room

Anyone who has visited a loved one in the recovery room knows it is not a pretty sight. There are reasons why they keep you waiting until the patient is awake and stable. It is not something you could ever prepare yourself for.

When I went in, my brother was having a difficult time coming off the anesthesia and struggled as if it were a bad trip. Even still, the whole time I held his hand and talked with him, his thinking was sharp and he asked detailed questions about the surgery.

The longer I kept my hands on him, the more settled he became. When he started to become silly, I was confident he was fine, and left him in the staff’s capable hands.

Recovery from back surgery

Twelve hours later he was walking the halls. He was released the following day. Once home, he refused to sleep in the hospital bed in the living room, which would have saved him walking the stairs to his bedroom.

He went to his office the following day – yes, just two days post op — and began walking miles every day. When he came to visit me in the country a week later, he walked erect, strong, and confident. He was sore, still healing from surgery, but his mind and body were strong and focused on his recovery and on beginning his new life without pain.

Could his positive attitude have something to do with his speedy recovery? Did he have a fantastic surgeon? Might the Reiki treatment have helped him prepare for surgery, maintain a positive attitude, and recover rapidly?

To me, admittedly a less than objective observer, the answer is simple – absolutely, all of the above!

Please signup for my email list and stay in touch!