Guestblogger Dawn Aldredge learned to practice First degree Reiki in my September 2012 class, practiced daily hands-on self-treatment, and returned four months later to learn Second degree. When she told this story in class, I asked her to share it with you. — 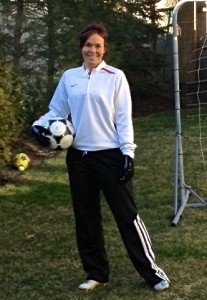 Reiki and Soccer
by Dawn Aldredge

I felt and heard that loud, horribly familiar popping/cracking sound in my left ankle. I knew all too well it likely meant I had just severely injured a ligament.

I knew because just a few years ago, I completely severed the ATF ligament in my right ankle while playing soccer. The ankle was so swollen and discolored, it no longer looked like part of my body. The painful recovery took four months, and when I re-injured the ankle, it had to be repaired surgically. The pain eventually subsided, but I still need another surgery to repair an error made in the first one.

I am 42 years old and play recreational soccer at a very high level among professional players. Our daughters, now 16 and 11, have each played since they were five, and I coach the younger one’s team.

I love the game so much that I often take on more than my body can handle, such as agreeing to substitute for other teams after I have been playing for a long time and my body is tired.

The day of this injury started with a 90-minute morning game. In the afternoon, I followed another 45 minutes of indoor play with subbing for an additional 45-minute game.

I felt the familiar muscle fatigue waft through my body as the game started.

Minutes later, I lunged toward the ball to gain possession. The tip of my foot caught on the turf and my ankle collapsed under me, with that dreaded popping.

I fell to the ground in horrible pain and immediately grabbed my left ankle. I wasn’t thinking to practice Reiki at first, but Pamela’s words quickly came to mind. She mentioned in our First degree class to place a hand directly on an injury that just happened, and keep it there. So that’s what I did.

I knew I was hurt badly, and I was terrified by just how badly that might be.

Unable to bear any weight on my left foot, I got up and hopped off the field. I sat on the sideline for half hour nursing the pain, my Reiki hand glued to the injured ankle. Then I got in my car and with my leg bent and resting on the seat so I could keep my hand on my ankle, I drove home.

I was in excruciating pain. It was a warm September night, but I was freezing cold and my body started shaking so badly, my teeth chattered. I tried icing the ankle but ditched it because the ice worsened the pain and the shaking.

My husband helped me to bed. I bent my leg toward my rear so I could keep my left hand on the ankle, which helped the pain and the shaking. But I was still freezing and for some reason, my teeth were still chattering.

If I hadn’t been in shock, maybe it would have occurred to me that those were all symptoms of shock!

I kept my hand on my ankle for a couple more hours before needing to sleep. Still shivering, I placed my hands on my abdomen, and drifted off.  At 3 A.M., I awoke with my whole body extremely hot and sweating profusely.

The next morning, inspected my ankle. To my surprise, it was really not all that swollen, with none of the bruising that usually accompanies a torn ligament.

The ankle was sore but could bear weight. I tried walking – and succeeded.

Even though my ankle improved rapidly, I kept my hands there for several hours a day over the next few days. It never bruised and barely swelled.

Back on the soccer field

Six days after the injury, I tested my ankle by balancing on it, hopping several times on it, and then running on it.

When that went well, I tested the range of motion and was amazed as it moved painlessly both up and down and side to side.

A mere week after the injury, with only minor residual soreness, I braced the ankle and played soccer as if nothing had happened. In the four months since the injury, I’ve played soccer regularly, with no ankle pain.

Please signup to stay in touch!