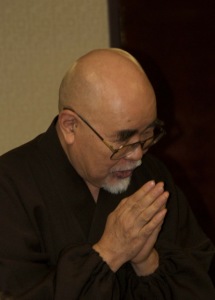 In our conversation about Reiki practice and money, Reiki master and Buddhist monk Hyakuten Inamoto referred to the Gakkai, the organization started by Reiki practice founder Mikao Usui. We continue the conversation below. At the end, my Japanese colleague shares facts relevant to the story that Usui spent seven years living with beggars.

Pamela Miles: Please tell us more about the Gakkai.

Hyakuten Inamoto: The Gakkai had no Reiki classes or seminars, only Reiki gatherings. That’s why people paid a fee to become a member. Then as a member, they could attend a Reiki gathering without paying an additional fee.

The highlight of the Gakkai’s Reiki gathering is receiving reiju from the shihan (Reiki master) who was in charge of the gathering.

Reiju was part of every gathering. The gatherings were held weekly, especially in the head office in Tokyo.

When Usui sensei was alive, there were more than 60 local chapters, and that number declined after World War II.

In a way, Reiki practice went underground in Japan. Many Gakkai members died during the war. The head office was in Tokyo, and there were air raids. The office was destroyed in the war and we don’t know if any archives survived.

So new Gakkai has no archives or papers. I tried to gather information again but found it very difficult. However, we haven’t lost everything.

The Gakkai now has only about 200 members, and it is a closed-door society. Reiki practitioners of other styles are not welcome in the Gakkai. Only people who are new to Reiki might be invited to join. Hiroshi Doi was allowed to join the Gakkai through introduction. Then the Gakkai became closed.

PM: On another note — can we set the history straight about Usui spending seven years offering Reiki treatment to beggars in the slums of Tokyo?

HI: No, we know for sure that did not happen. Usui had no time for that. He was on Kaurama in 1922 and passed away in 1926, very limited time.  My personal feeling is that Usui sensed he didn’t have much time.

The above conversation is available in Spanish translation: Gakkai de Usui.

The above conversation is available in Italian translation: La Gakkai di Usui

Want to stay in touch? Join my email list here.

MAINSTREAMING REIKI webinar recordings are available to support your personal or professional Reiki practice. Topics include:
How to Explain Reiki?
Where’s the Proof?
Professional Readiness
What is Spirituality?