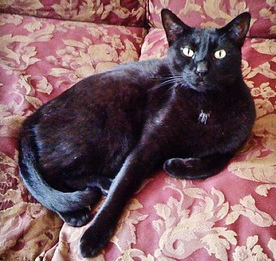 Pedro was emaciated and at death’s door when rescued from a kill shelter. After two months at the vet, the Pit Bull was still nervous around people.

He was hesitant when I offered him his very first Reiki treatment. Five minutes into the treatment, he walked away and curled up into a ball in the corner of his crate.  He was done and I honored that.

I returned the next day. This time, when I laid his blanket out, he reclined, but kept one eye open during his 45-minute Reiki treatment.

When I returned a few days later, Pedro sat as close to me as possible, rolled onto his back and threw his legs into my lap.

My own cat, Leroy (above), was also hesitant at first. He would literally run off any time I tried to place my hand on his heart. Then Mrs. Takata’s expression “hands-on, Reiki on” came to mind.

That night I slept with my palms turned up, so he could come for a treatment if he wanted.

I awoke to find Leroy lying with his heart cupped in my upturned palm. This continued for three or four nights in a row. Now he has no problem when I place my Reiki hands on his heart.

Sadie, my little Yorkie client, was so terrified of going for walks that the mere sight of her dog walker caused her to shake violently.

During our second session, the dog walker arrived to find Sadie, belly up, in a deep state of relaxation. He cradled her in his arms, in a total state of disbelief that she would allow such a thing, and whisked her off for her walk.

The next day, he reported that she’d been much calmer and didn’t shake at all on their walk. Sadie is now much less anxious outside and her person is confident the Reiki treatments played a part in her turnaround.

I love sharing Reiki treatments with animals. They are such sensitive beings and amazing teachers. They often show you where they’d like your Reiki hands placed and get up and walk away when they’re done. Unlike us humans, animals never second-guess what they’re experiencing, which helps me to do the same.

RELATED READING:
A Dog’s (Reiki) Life
Reiki for Cats and the People Who Love Them

5 thoughts on “Reiki for Animals”