Since starting Reiki practice in 1986, I have offered Reiki healing and training to many families addressing Asperger’s or other diagnoses on the autism spectrum with good results. Let’s get the word around how much Reiki practice can help these families. Here an Australian mother shares her story. 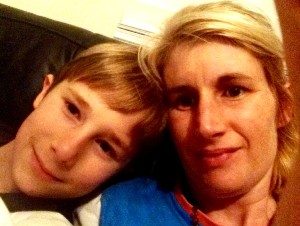 Reiki Healing for Myself and My Son
by Sacha Sampson

I was somewhat familiar with those words, but never imagined they would be part of my life or our son’s.

For many years, I’d looked for an answer to our son’s quirkiness. Everyone said he was just a normal kid.

Then the meltdowns became violent. He would scream for hours in a total rage while his younger siblings hid in the corner.

Waiting for an Asperger’s diagnosis

By the time he was nine, I was begging our family doctor for help. He referred us to a paediatrician who specialises in autism.

We waited eight months for the appointment.

The meltdowns hit epic proportions not long before we got to the specialist. Our son was pulling knives on me and threatening to do horrible things to himself.

It took the paediatrician a mere 45 minutes to diagnose Asperger’s Syndrome (high functioning autism, ASD) and anxiety. After nine years, I was relieved and grateful to finally know what was going on.

I took a First degree Reiki class and began practicing on myself. As mum to four kids aged 2-11, it’s sometimes a challenge, but I manage to get my hands on myself every day, and meditate as the day allows.

I also started practicing Reiki on my son, giving him a full treatment every other day.

In the beginning, he was apprehensive and fidgety, so I shortened the time he was lying down and chatted to him about what we were doing. After three or four modified treatments, he knew what to expect and calmed down as soon as I started his treatment.

How Reiki practice helped my son

In the year since, he has moved from strength to strength.

Previously when he felt anxious, he would become violent, spray expletives at us, and lash out at his siblings. Now he works through anxiety attacks and meltdowns without becoming violent.

In the past, when a situation became overwhelming, he would scream and become angry. Now he knows when to take time to clear his head.

His overall demeanor has improved. He now shows compassion and understanding towards others.

The biggest change has been his new ability to maintain a friendship. Children with autism typically are not interested in creating relationships, so in the past, he would play by himself in the school playground. Now, after 12 months of Reiki practice, he has a friend who is patient and understanding and a great support.

He has asked on a number of occasions to learn First degree. I don’t know which one of us is more excited. As he says, “Reiki Rocks!”

Has Reiki practice helped you and your family? Let’s share your story so others can see that Reiki practice can help them too. Read the call for submissions.

6 thoughts on “Reiki Practice and Asperger’s”